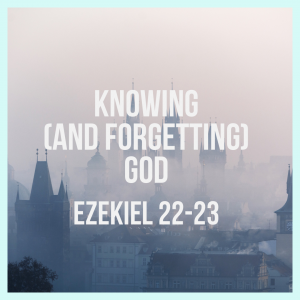 Ezekiel is asked whether he will judge Jerusalem—the “bloody city” (22:2)—and then given words to declare to her all her “abominations.” Basically, she has “become guilty by the blood that you have shed, and defiled by the idols that you have made” (22:4).

Here we may discern a pattern. Leaving God and replacing him with the worship of idols leads to desecration of God’s holy assemblies. This leads to sexual immorality, and in turn spirals down to destroy the economy with lack of trustworthiness and stability. The root of it all is forgetting God.

Words like these ring true in the ears of many in the contemporary West. We must remember God. Where are the religious leaders and the political leaders at times like these? Here, Ezekiel declares they have made matters worse, if anything. “The conspiracy of her prophets in her midst is like a roaring lion tearing the prey” (22:25). “Her priests have done violence to my law and have profaned my holy things” (22:26). “Her princes in her midst are like wolves tearing the prey” (22:27). And over it all is the well and thickly spread whitewash—saying all is fine and proper, when it is actually grossly immoral—given by the prophets: “her prophets have smeared whitewash for them, seeing false visions and divining lies for them, saying, ‘Thus says the Lord GOD,’ when the LORD has not spoken” (22:28).

Once again, we who have authority, a voice, and a platform should make sure that we are not like these wicked leaders who failed to call God’s people back to the truth. Speak up and let the truth be heard!

Chapter 23, God through Ezekiel once more appeals to his people through a remarkable parable. It is of “two women” (23:1), Oholah and Oholibah—one stands for Samaria, the other for Jerusalem. The long and the short of this extensive, un-put-down-able story is that as God’s people had “whored” to idols in Egypt, so they have never fully been cured of that idolatrous pattern. And so God will act in judgment: “Because you have forgotten me and cast me behind your back, you yourself must bear the consequences of your lewdness and whoring” (23:35).

Once again, ringing loud and clear, is this issue of knowing God—of being those who rather than forgetting God, honor God, know him for who he truly is, and follow him. Such God-centered knowledge, living, and action is the solution, for God himself is the solution. May we fall down and worship God and know him as he has revealed himself in his Word.