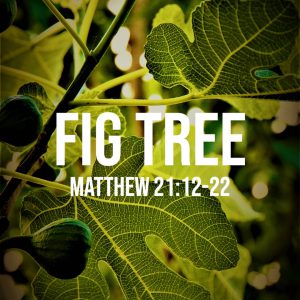 Jesus’ mission to Jerusalem requires a prophetic word towards the corrupt state of the people of God, and in particular, the temple at the time (21:12-13). God’s people are in constant need of being brought back into line with the truth of the Bible and into conformity with the gospel, reformed and always reforming. The temple in particular had become a center not just of mercantile exchange—like finding St. Paul’s Cathedral turned into Wall Street—but the mercantile exchange was being used to make it harder for the “all nations,” those not ethnically Jewish, to gain access to the temple. They had to change money to buy sacrificial animals. Rather than making access to God easier, they were making it harder. The house of God is to be a house of prayer (for all nations), when they had made it simply a place to make money.

People come to Jesus, the blind and the lame, and they recognize him as the Messiah, the Son of David, and are not shy about saying so (21:14-15). The religious do not like this acclaim to Jesus (21:15-16), especially when it is coming from the lips of the theologically ignorant and the underclass. But Jesus quotes from the Bible, Psalm 8, that it is out of the mouths of infants that God has ordained praise (21:16). Often the majesty of God is seen by those who are not standing on their own merits.

Jesus, in a much-misunderstood passage, curses the fig tree (21:19). The fig tree was symbolic of Israel, and by so doing Jesus was symbolically pronouncing judgment on the corruption that he had discovered in Jerusalem and particularly in the temple. Amazingly, the fig tree withers at once; the disciples are amazed (21:19-20). Jesus then explains that if they believe and do not doubt, they will be able to do mountain-moving kind of miracles (21:21-22)—meaning not that his disciples can go around shifting Mount Everest to another part of the globe, but the extraordinary shift from corrupt religion to the spiritual power of the gospel is something that we too can be a part of if we trust in God and preach the gospel. Even a corrupt religion, like the temple at the time, even that “mountain” can be moved.

May God give us strength to believe and not doubt, and to do so by filling our mind’s eyes with the passionate, powerful, and compassionate person of this Christ, denouncing fake religion, and accepting the humble and broken, and so starting a new movement of the gospel.